In a DevOps environment, upgrades are drastically simplified through automation, orchestration, and separation of concerns. As a result, upgrading to a new version of PingFederate is more like deploying any other configuration.

However, the difference is that configuration updates can be achieved with zero downtime and no loss of state, whereas in version upgrades we consciously sacrifice state to maintain zero downtime overall.

You can take a traditional upgrade approach to a containerized environment, but it provides no value above the process described here.

As an example, we'll walk through upgrading a PingFederate deployment from 9.3.3 to 10.0.0 in a Kubernetes environment. However, the concepts should work with any container orchestrator.

Before you begin ¶

About this task ¶

Setting up and preparing your environment ¶

The most important factor to a successful version upgrade is preparing an environment for success. This means using the DevOps process and a blue-green deployment. For a blue-green Kubernetes deployment, we simply update a selector on a service.

You should have at least two environments (non-production and production). This gives you room to test everything before putting it into production.

All deployments should be stringently validated before rolling into production. To be confident in your manual and automated tests, your environments need to be as close to identical as possible. In an ideal world, environments have dummy data, but function exactly the same.

Your environments are nearly identical when the only thing that changes (related to configuration) between environments is URLs, endpoints, and variable values.

Nobody is perfect, so do not trust manual changes directly in production. You should disable all admin access to production.

If you can roll it out, you need to be able to roll it back, too!

Our example environment is set up with Apache JMeter generating load to a Kubernetes service (which routes load to downstream PingFederate containers). This Kubernetes service is essentially a load balancer that follows a round-robin strategy with keep-alive. 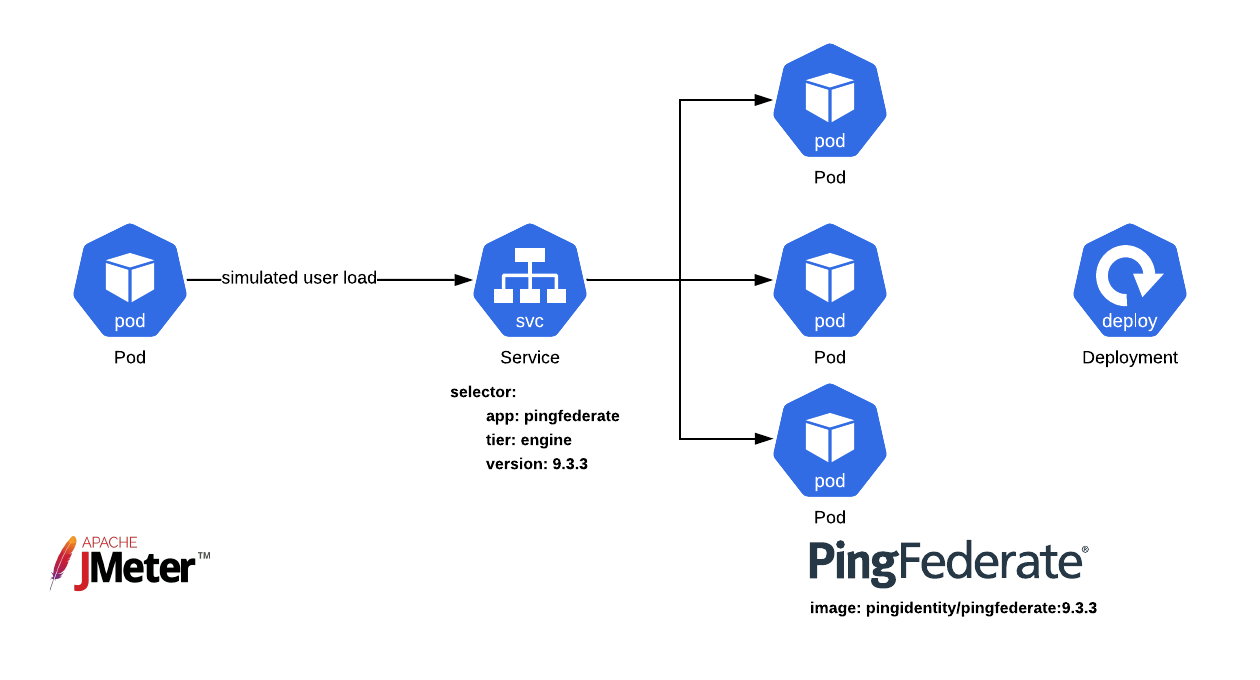 The key here is that the service is pointing to this deployment of PingFederate because of a selector defined on the service that matches a label on the PingFederate deployment. This is what makes the blue-green approach possible.

A deployment in Kubernetes manages containers in pods, defining things, such as which containers to run, how many containers, the metadata labels, and the update strategy.

Using DevOps processes can mean that things like comfortable setup processes and admin UIs in production are sacrificed, but for most organizations, the resulting zero downtime for rollouts and rollbacks is easily worth it.

The terms "zero downtime" and "loss-of-state" are significantly different. Zero downtime is what this upgrade process achieves: at no point in time will users experience a 500 bad gateway error. However, we are sacrificing state to achieve this. Because we are moving from one entire deployment to another, the new deployment does cannot have access to runtime state in the previous deployment. For this reason, it's critical to externalize state as much as possible.

With your environment set up properly, you can do the product upgrade offline. Offline here means we'll pull the profile into a Docker container on our local workstation to upgrade it.

Before going into the actual steps for a profile upgrade. It's worth noting that if your profile is well-constructed, using the minimum number of files that are specific to the PingFederate configuration, you might be able to avoid this entire section.

For example, the upgrade for our baseline profile (https://github.com/pingidentity/pingidentity-server-profiles/tree/master/baseline) worked almost flawlessly from 9.3.3 to 10.0.0. In fact, the only file that required an update was adding a "Pairwise definition" to ./instance/server/default/conf/hivemodule.xml.

This could be the case for you as well. If you want to try this, just use your PingFederate profile with the new version image tag, and watch the logs for errors.

Some details of the upgrade process might be different for you, based on your PingFederate profile.

Standing up a blue-green deployment ¶

Now that you have a new profile, you can stand up a new deployment that uses it and flip all of the traffic over to it.

This routes all traffic to the new PingFederate deployment without downtime occurring.