DevOps variables provide a way to store and reuse values with our Docker containers, ultimately used by our Docker Image hooks to customize configurations. 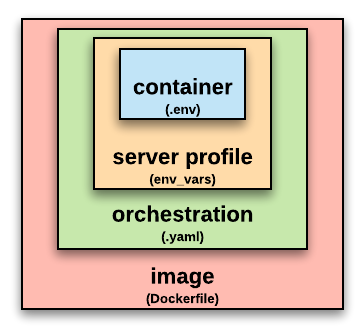 Assume that you're looking down at this diagram as a pyramid, where the container is the top. The order of precedence for variables is top down. Generally, you'll set variables having an orchestration scope.

Variables having an image scope are assigned using the values set for the Docker Image (for example, from Dockerfiles). These variables are often set as defaults, allowing scopes with a higher level of precedence to override them.

To see the default environment variables available with any Docker image, you can enter:

Where <product-image> is the name of one of our products, and \

See our Docker Images Reference for the environment variables available or each product, as well as those available for all products (PingBase).

Variables having orchestration scope are assigned at the orchestration layer. Typically, these are environment variables set using Docker commands, or Docker Compose or Kubernetes YAML configuration files. For example:

Variables having server profile scope are supplied using property files in the server-profile repo. You need to be careful setting variables in this scope as the settings can override variables having an image or orchestration scope.

The following masthead can be used in your env_vars files to provide examples of setting variables and how they might override variables having a scope with a lower level of precedence. It will also suppress a warning when processing the env_vars file:

Variables having a container scope are assigned in the hook scripts, and will overwrite variables that are set elsewhere. Variables that need to be passed to other hook scripts be appended to the file assigned to ${CONTAINER_ENV}, (defaults to /opt/staging/.env). This file will be sourced for every hook script. 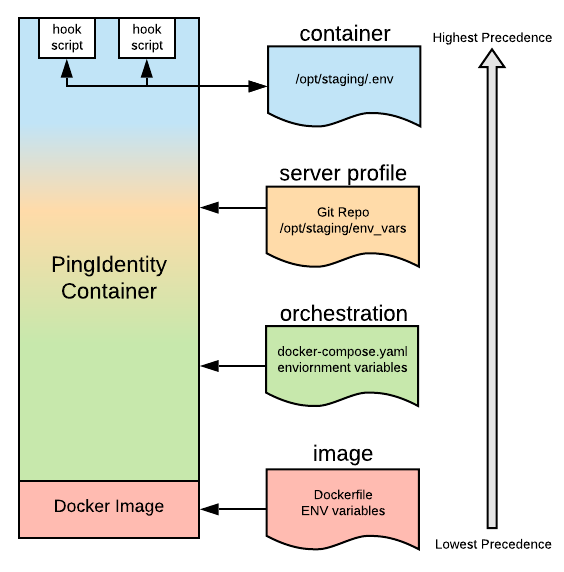