The following example is an extension of the topic Orchestrating a replicated PingDirectory deployment in Kubernetes orchestration for general use. In this example, you'll deploy PingDirectory containers across multiple Kubernetes clusters. 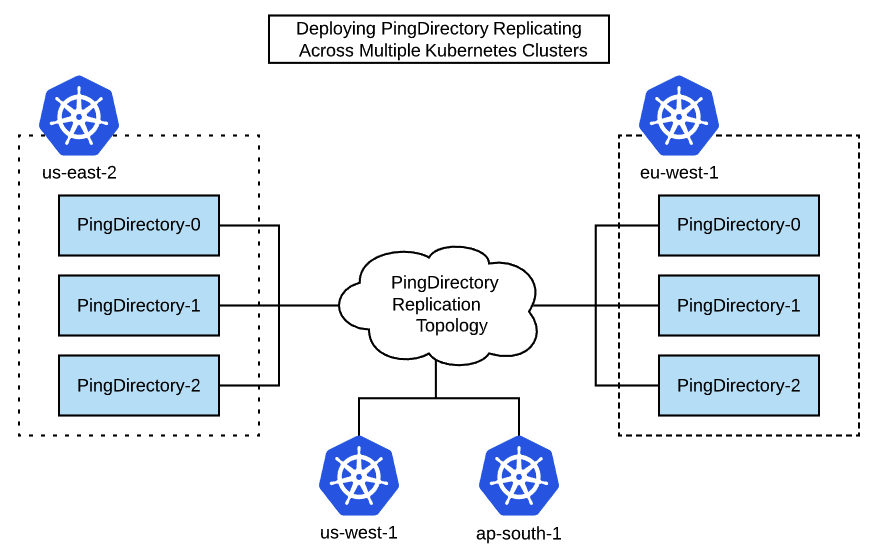 Having a replicated PingDirectory topology across multiple kubernetes clusters is desired for highly-available active/active deployments as well as active/partial-active scenarios where a hot backup is expected.

Ping Identity PingDirectory Docker images abstract away much of the complexity of replication initialization scripts, even across clusters. Instead, the focus is on providing accessible DNS hostnames across clusters and environment variables to build ordinal hostnames for each Directory instance.

You will need the following:

Because details within each Kubernetes cluster are well-hidden from outside the cluster, external access to each pod within the cluster is required. The PingDirectory images set up access to each of the pods using load balancers from an external host to allow each pod to communicate over the LDAP and replication protocols.

The most important aspect of a successful PingDirectory cross-cluster deployment assigning accessible and logical DNS hostnames according to the following rules:

If you were to simulate a "multi-cluster" environment in a single cluster, you could just set up two namespaces and create a separate ClusterIP service for each directory, as follows:

To provide flexibility on how PingDirectory finds other instances, a full DNS hostname is broken into multiple variables.

A full hostname is created using the following command:

An example of the YAML configuration for these environment variables:

These environment variable settings would map out as follows:

This in-depth variable conversation offers the flexibility to accommodate various infrastructure constraints. For example, in some environments, you can't use the same port for each instance, so we must accommodate incrementing ports.

To understand why the initial creation of a cluster requires a prescriptive approach, it's helpful to know what happens when a cluster starts.

Because we're deploying a statefulset, you can deploy the entire first cluster at once. A statefulset creates one pod in the number of replicas at a time.

In our first cluster, this would be the hostname of pingdirectory-1. but it could also be pingdirectory-0 of another cluster. When the query returns successful, creation of the replication topology automatically begins.

It might not always be clear what truly happens during "replication". Though it is partially proprietary, you can think of it as:

Because of this, horizontal scaling of directories isn't something to be taken lightly.

There are multiple types of deployments that have been tested because of various infrastructure constraints discussed in this guide. The example files in 09-multi-k8s-pingdirectory show that the biggest key is having a way to provide an accessible hostname to all the other pods. In most examples, you do this by creating a service name and using statefulset.kubernetes.io/pod-name as the selector to isolate one pod.

These are examples for demo environments to get a feel for what a multi-region deployment looks like.

20-kustomize/09-multi-k8s-pingdirectory/01-single-namespace is the least constrained example. It's good to just see what logs on a cross-cluster topology look like:

When the all the instances are up and running, you should see something similar to:

These example should be possible in most Kubernetes providers as long as you can:

Consider the EKS Peering Config example if you want to test this. 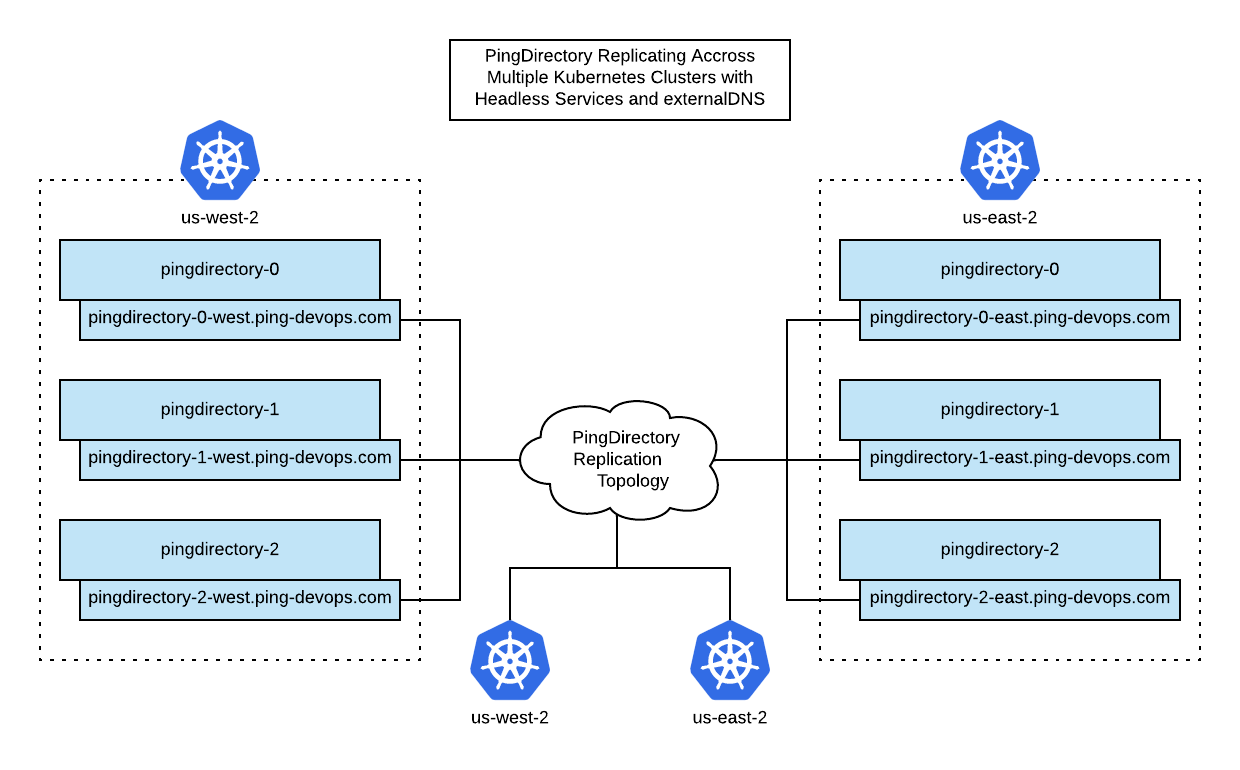 This example uses Headless Services instead of regular clusterIp services. This is necessary in a VPC-peered environment because typically the route-tables and IP ranges you've peered correspond to container IP addresses, not service addresses.

If you were to use clusterIp addresses, the instances might, unexpectedly, not have network connectivity to each other.

The headless services use externalDNS to dynamically add records to the DNS provider (example, Route53)

Because this example requires more care, you should sift through the yamls to understand what is going on.

When the example is stood up, you'll see logs similar to:

Some organizations don't allow VPC peering or similar networking functions, or there might be no way to create external hostnames on clusterIp services. Here are some examples that may help.

In a scenario where you don't have VPC peering or must create external DNS names manually, it might be beneficial to use NodePorts.

If these names are being manually, then create the services and assign names before starting the statefulset.

The following examples are for extremely constrained environments where traffic must go out through an external load balancer. For many purposes, these can be considered deprecated. Avoid doing replication through load balancers when possible.

The following diagram shows how you can use a single load balancer.

The following diagram shows how you can use muliple load balancers. 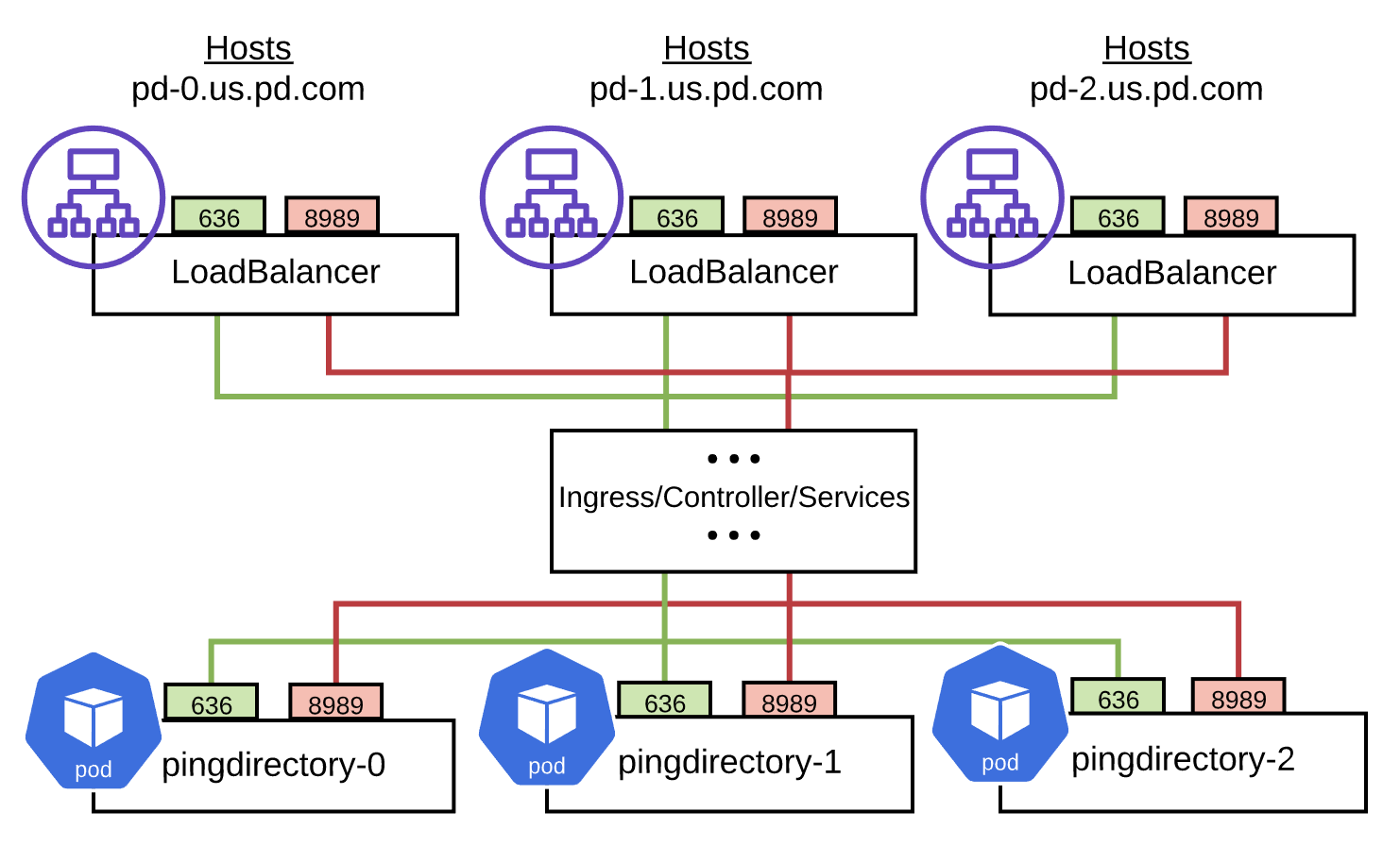 The StatefulSet service manages stateful objects for each pod.

The following is an example StatefulSet service configuration for one pod:

In addition to the StatefulSet, other resources are required to properly map the load balancers to the pods. The following diagram shows each of those resources. 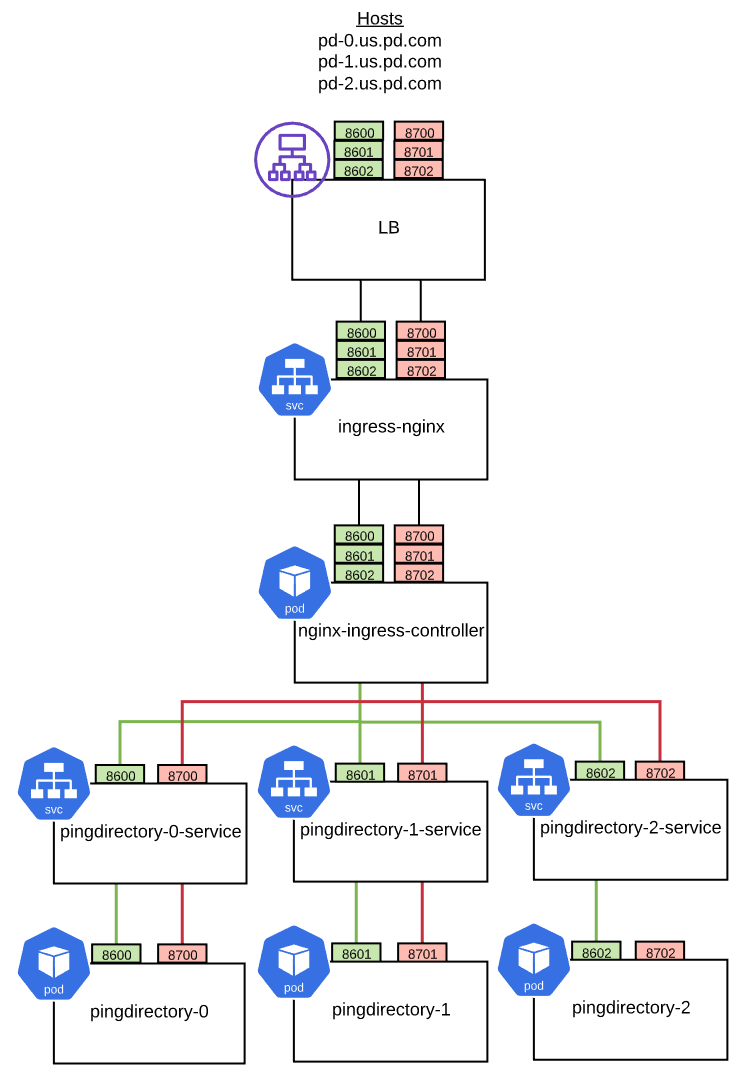 Several components map the ports from the external load balancer through the NGINX Service and Controller:

Provides an external IP and obtains definitions from the NGINX Ingress Service.

The following is an example NGINX Service configuration:

The ConfigMap for TCP services (tcp-services) provides the mappings from the target ports on the NGINX Controller to the associated pod service.

You must replace the variable ${PING_IDENTITY_K8S_NAMESPACE} with the namespace that your StatefulSet and Services are deployed into.

The following is an example of the ConfigMap for the NGINX TCP services configuration:

The examples in 20-kustomize/05-multi-k8s-cluster-pingdirectory create an example deployment across two clusters in AWS EKS:

Deploy the NGINX services and ConfigMap for the example.

This allows the services to be reached by the NGINX controller with an AWS Network Load Balancer (nlb). You must run these with an AWS/Kubernetes profile allowing for application into the ingress-nginx-public namespace. Also, be aware that there might already be other definitions found. You might need to merge.

The cluster.sh script creates the .yaml necessary to deploy a set of PingDirectory instances in each cluster and replication between.